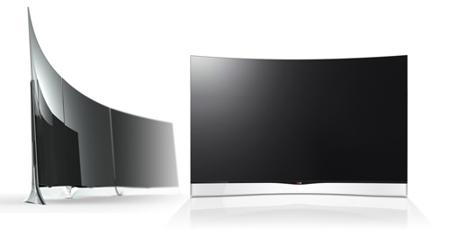 So, you think that your spanking new flat screen TV in the living room is the bee’s knees, making you the talk of the neighborhood? Sorry to say, bub, but having the largest display in the vicinity is not going to cut the mustard any more these days. LG might have stumbled upon something new to the market that could very well kick off a revolution where TVs are concerned, with the announcement that their 55-inch (54.6-inch diagonal) Curved OLED TV (also known as Model 55EA9800) has gone for sale in its home country, South Korea, and deliveries are tipped to begin from next month onwards. This bit of news does make you want to make a move over to the country that gave us keen competitors to normally reliable Toyota vehicles, and of course, Gangnam Style.

From next month onwards, over 1,400 LG retail stores in South Korea will start to take orders and deliver them to the masses. These premium TVs have been slapped with a KRW 15 million price tag – and when converted, it would amount to the region of $13,500 thereabouts. You can already see the kind of second hand car that you can drive in exchange for such money, no? Having said that, LG’s Curved OLED TV’s availability announcement would give LG the distinction of being the first and only company to commercialize both the flat screen OLED TV as well as the Curved OLED TV, which ought to provide LG with a significant lead in this market segment.

The new LG EA9800 model would sport the industry’s very first curved screen ergonomic design, where it offers an “IMAX-like” viewing experience right smack in the comfort of your own home. Thanks to over five years of research when it comes to developing the optimum curvature, the entire screen surface is equidistant from the viewer’s eyes, which does away with the issue of screen-edge visual distortion and loss of detail. Anyone interested in this? You might want to start saving up from now on.