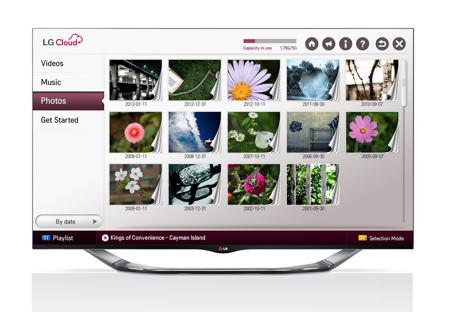 In the 21st century, the cloud is no longer the domain of the skies, but rather, it is an online service that has brought plenty of benefits to the masses, since it enables one to stash some files online (as long as space permits, of course) in one’s account, which can be accessed anytime, anywhere – so long as there is a decent Internet connection, of course. Different companies have come up with various cloud services, ranging from Dropbox to Google’s suite of productivity apps, and now we have South Korea consumer electronics giant LG having announced the global availability of the LG Cloud service. First launched in the US, South Korea and Russia last year, the LG Cloud (which happens to be a TV-centric service) will be introduced in over 40 other countries that will include Europe, Asia, Central Asia and Latin America regions by the end of May.

Just what does LG Cloud bring to the table? For starters, it will pave the way for users to stream content straight to LG Cinema 3D Smart TVs, in addition to deliver a convenient location to store entertainment content which will automatically synchronize between PCs, smartphones and TVs.

Richard Choi, senior vice president of the Smart Business Center at LG Electronics, said, “LG Cloud eliminates the time-consuming process of having to download or manually transfer content between devices. Today’s consumers are no longer loyal to only one type of screen. They move seamlessly from TVs to PCs to smartphones and it’s up to us to help them get the content they want whenever and wherever they want it. LG is one of very few companies that can offer integration across so many display products.”

With the LG Cloud app, one is able to access videos, photos and music the moment it is uploaded to the user’s account. You can get it from Google Play or the LG Smart World store, where this easy-to-install app will play nice with LG CINEMA 3D Smart TVs, PCs and Android smartphones.