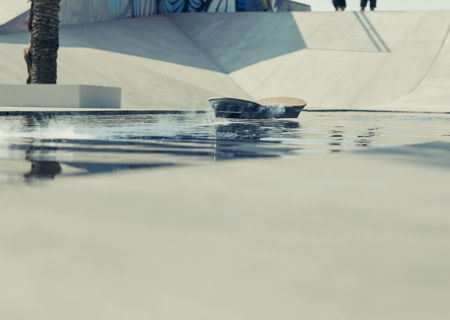 The very idea of a hoverboard does sound rather out of this world, as though existing technology is unable to do anything about the situation. Well, it looks like the Hendo Hoverboard did make some ripples in the news last year as it proved that such an idea is actually workable, but this time around, we have the full reveal of the Lexus Hoverboard that brings along with it a touch of exclusivity. After all, Lexus does offer luxury vehicles to ferry those 5-star rear ends around, so why not let them take on a new role in the world of hoverboarding (assuming there is such a thing that will kick off in the future, of course)?

The Lexus Hoverboard was first unveiled in June last year, and they are currently working on a full and final reveal of the project after concluding a successful testing phase which took place in Cubelles, Barcelona. This unique project that kicked off 18 months back thanks to a collaboration with a team of scientists from IFW Dresden and evico GmbH, is starting to bear fruit. It has even undergone extensive testing with pro skateboarder and hoverboard test rider Ross McGouran, over in Dresden, Germany, and there will be further tests run that will see the hoverboard work within dynamic surroundings.

In fact, the tests were carried out in a specially constructed hoverpark, where it merged elements from skate culture with technology within its architecture. There was up to 200 meters of magnetic track which were laid beneath the hoverpark surface in order to create the dynamic test, and it allowed tricks that no skateboard could ever perform, including the rather miraculous nature f travelling across water. The magic behind the Lexus Hoverboard lies in its technology that features two “cryostats” – reservoirs in which superconducting material is kept at -197 degrees through immersion in liquid nitrogen. No idea on how much it will cost when it arrives, but you can be sure that it is not going to be cheap.