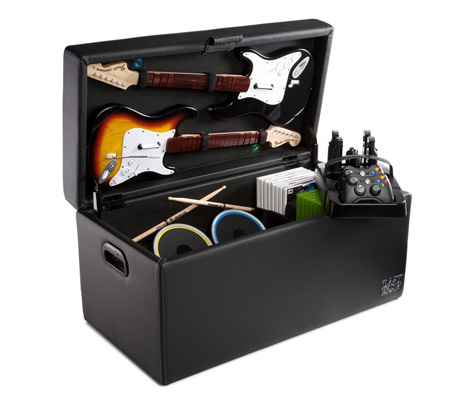 When it comes to video game accessories, you would do best to stick to a tried and tested name. After all, it simply doesn’t make any sense not to rely on a trusted name especially when plenty of third party manufacturers come out with sub-par offerings of their own. At first, it might seem as though those were bargains of the month, since they work just as well as the real thing, but after a while, the difference in quality becomes rather stark. You will find that the original hasn’t break break down yet even though you’ve had hundreds of hours of gaming, while the cheaper purchases would have been broken or spoilt by then.

Having said that, proper storage of your video game peripherals is also another important aspect. LevelUp knows this, which is why they have unveiled a storage solution for Rock Band, aptly known as the Rock Band Ottoman.

Sure, it looks real easy to be a rock star on paper, as all you need to do is get smashed and snort lines of white powder to get “inspired” to write songs and scream your lungs out on stage, while groupies fling their panties at you with but a look. Little do people know that being a rock star requires much more than that – we’re talking about having a bunch of loose gear and accessories as well, and even if you’re not the real deal but an actual Rock Band fan, all that gear and accessories can quickly add up to the home’s clutter, making band practice a whole lot less fun. LevelUp’s solution would be the Rock Band Ottoman, where it is made out of solid wood and a sleek leather-like exterior, making it durable enough to withstand the most destructive performer.

Features of the Rock Band Ottoman include fitted drum stick loops, fitted side accessory pockets, and a Velcro guitar loops to keep your gear secure. You are able to comfortably fit two axes, one drum set, one microphone, and one drumstick set. Not only that, LevelUp has included a safety hinge lid and side handles for easy lifting just in case you decide to hold a gig at your friend’s house. The “Skull and Snakes” version is selling online for $179.00, while the “Back in Black” version is going for $89.99.