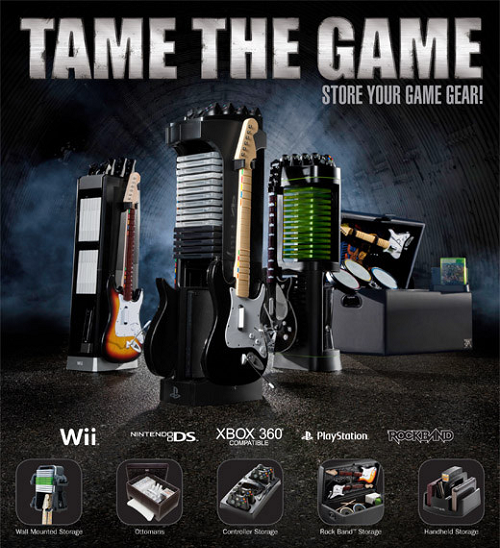 If you have a video game console for your TV, then you know how much room they can eventually take up. Most of us have home entertainment centers that hold the console unit and games, but some of us have gaming accessories like instruments for Guitar Hero or Rock Band.

As you can see, these gaming holders are designed for the Wii, Xbox 360, and Playstation. They also have some sort of set-up for the Nintendo DS. They also have a set-up for Rock Band, and it seems to be made to hold the drums. That is pretty good, because I can honestly say from experience that Rock Band drums really take up a whole bunch of space. As I write this, I have my drum set shoved underneath a kitchen table, still somewhat in the way.

As for the other towers, they are made to hold the gaming peripherals of guitars, the games, and the console units. They also hold the controllers, but it is a real shame that they don’t charge them.

These gaming towers are appropriately named Level Up and are made by Level Up Gear. They will launch in October at stores like JCPenny, Toys R Us, as well as Bed Bath and Beyond.