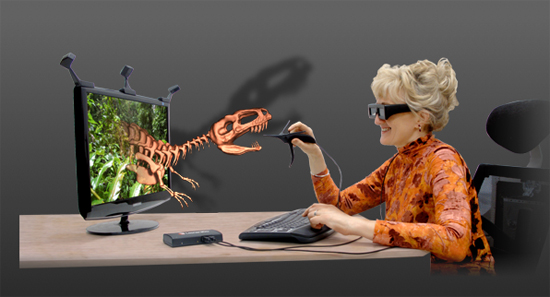 I’m not certain if HDTV companies are just shoving this down our throats, but 3D apparently is supposed to be huge. If it isn’t now, then it will be soon. I suppose there will be great demand for those who need to sculpt virtual creations in 3D, and this is where Leonar3Do comes in.

Granted, I do not know how to pronounce it, but Leonar3Do allows the user to make a 3D object on their screen, view it in 3D, and all sorts of other features. The user will have to wear the special goggles, and use the “bird”, an air-suspended mouse. I have a video of it after the jump so you can see it in action.

According to the software developers Daniel Ratai and Zoltan Karpati: “it’s so user-friendly, an 8-year old can do it”. Okay, that isn’t a direct quote, but I was trying to imitate those Geico “Caveman” ads. I once dabbled in 3D graphics, and I found it pretty difficult. I’m sure I probably could have done better at it if I had the software and a faster computer.

As for this software, it works with Windows XP SP3, Windows Visa, and Windows 7. It is coming soon for Mac and Linux platforms, and will support 3D file formats like .obj, stl, .3ds, and others. The package is pretty expensive at $1,000.