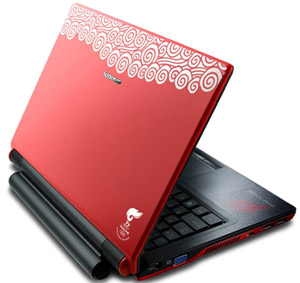 The partnership between Lenovo and the 2008 Beijing Olympic Games is not restricted to the new Olympic torch design, as they will launch a complete range of products inspired by the games as well. The first of these products is the notebook ‘Xiang’ that has the same graphic patterns found on the Olympic Torch.

We don’t have more details about the notebook, but Lenovo signed a partnership with Liu Xiang, the gold medallist for 110 metres hurdles in Athens to promote this new line of products.

All of these plans are a part of Lenovo’s partnership to promote the 2008 Olympic Games in Beijing, in which they hope to promote its brand using the universal appeal of the Olympics, expecting to achieve a worldwide impact with this strategy.

Read more about this notebook (translated).