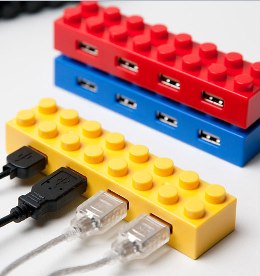 Did you ever have gadget déjà vu? That’s when you see a gadget that you are certain that you saw before. This happened to me this morning when I saw the Lego USB Hub.

The moment that I saw this item, I wanted to report on it, but I was certain that we had covered it before. Oddly enough, we never have. We have reported on many varieties of Lego USB Flash Drives, but not a Lego USB Hub.

I suppose that we at Coolest Gadgets can say that this is the first time we have seen a four-port Lego USB Hub. They are not official Lego products, but they come in Lego colors of red, blue, yellow, and black.

What you don’t see in this photo is a wire that comes out of the Lego brick itself that attaches via mini USB port. Now, I am sure that you are wondering if you can stick two of these hubs together and get eight, twelve, or more hubs with multiple bricks connected to one mini-USB wire that is connected to the PC.

The answer is: I don’t know, as my source does not mention anything about that. If you were to ask me, it doesn’t look like it. Well, if you want this Lego USB Hub, it is only available in Korea for a low price of $12.