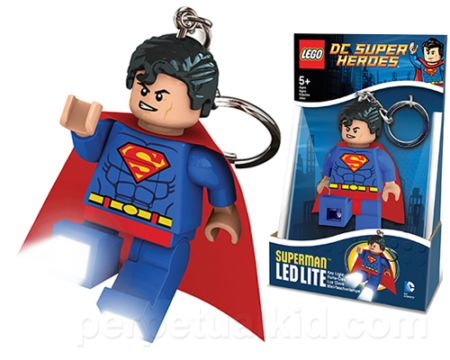 Are all key chains created equal? Apparently not, as with the case of this $11.99 LEGO Superman LED key chain. After all, we do know that Superman himself does come with a fair amount of powers, apart from being this ultimate being who is nigh impossible to destroy, he also has this innate compassionate heart that will want to preserve a life whenever and wherever possible, no matter how reprobate a person has been. Super speed, super strength, the ability to fly, as well as being able to shoot fiery beams from his eyes, we forgot that the folks over at LEGO has improvised on his powers by making his feet light up your way.

The LEGO Superman LED key chain will be unable to stop a speeding locomotive, or be faster than a bullet, but it is able to make sure that your handbag’s contents can be sifted through in a safe manner even when you are in a cinema. All you need to do to make the LEGO Superman LED key chain light up would be to squeeze the “S” on his chest, and both LED lights located at the bottom of his boots will be activated.