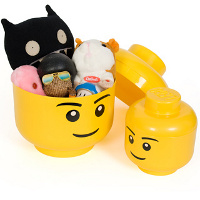 We looked at the Lego Storage Bricks last week, and today let us have a gander at the Lego Storage Heads. Obviously, you can tell by the name itself that this will play on the Lego theme, where you will be able to store a gamut of stuff within (with most people probably using it to hold loose Lego bricks, we think). Just goes to show that Lego minifigs aren’t empty “up there”, eh? Makes you wonder whether they will suddenly come to life at night ala Toy Story or Night at the Museum whenever you aren’t around. You will be able to choose from small and large head sizes, which will retail for £14.99 and £19.99, respectively. Bear in mind that these aren’t a rip off of sorts at all, but is instead officially licensed from the Danish company. Interestingly enough, they’re like regular Lego pieces that can be clicked together and stacked – now how about that?