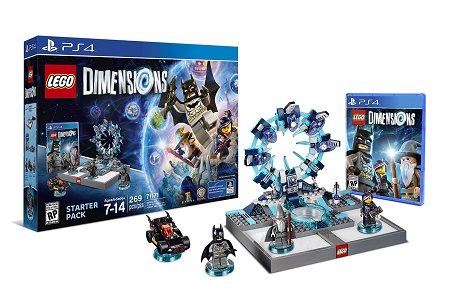 When we were little, LEGOs were the best thing ever. We could build anything our little brains came up with, and it gave us the literal building blocks to create entire worlds out of not very much material. Since those golden days of yesteryear, LEGO has been churning out more and more play sets, but the rise of popularity of video games like Minecraft called for more action from the beloved brand, lest they be left behind.

This LEGO Dimensions game takes all of your favorite characters from well-known franchises, and puts them not only into your hands, but also in your game. It’s very much like Skylanders and Disney Infinity, but plays like the LEGO video games that are already on the market. The toy pad is what will allow you to put characters, vehicles, and accessories into the game, and you do this by placing the NFC toys onto the pad. Of course, what fun would it be if there wasn’t a building aspect to the game, so you can reconstruct pieces in the real world to unlock cool new powerups and abilities in-game. You also build vehicles, and the gateway that lets you put your characters into the game.

In the game, you’ll be fighting with and against characters from Lord of the Rings, DC Comics, The LEGO movie, and much more. It’s definitely a money sink as you will undoubtedly always have more characters, vehicles, and other do-dads to buy, but it gives you tons of options for creativity in combination with gaming, which time-wise is going to be well worth the money you’ll put into it. Getting a starter pack to get you going will cost you $79, and will obviously go up from there. You’ll get tons of real and digital world puzzle solving to wade through, and likely have plenty of laughs along the way. You’ll be able to pick up this game for PS4, PS3, Xbox One, XBOX360, or WiiU.