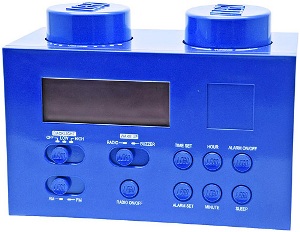 It seems like every week at Coolest Gadgets we cover some sort of Lego-based gadget. Last week, it was the Lego Wind up Dynamo Torch. This week, it is this Lego Alarm Clock.

As you can see, there is very little Lego in the Lego Alarm Clock, but, in its defense, it does look like a 2 x 1 brick. I’ve seen other products that were an homage to the name of Lego, but most of them were not endorsed by the giant Danish toy company. The Lego Alarm Clock has Lego written all over it, on every single bumpy part, or “stud”.

Speaking of studs, those two on top don’t look like they would fit into any Legos that I have ever owned, and this includes the Duplo and Quatro collection. No, the purpose of those two knobs is to be knobs for adjusting the volume and tuning of the radio.

If you don’t believe me, then go to your nearest Wal-Mart and you’ll probably find it in the same aisle with the matching sheets, towels, and bedcovers. If you like it, be prepared to spend about $29.97 for it.