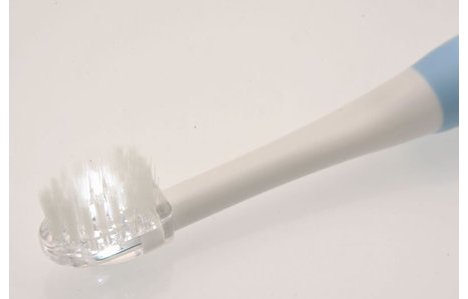 Here in the US we have access to all kinds of UV gadgets that will sanitize your toothbrush.  Oddly there aren’t many toothbrushes that have some sort of lighting within the brush itself in the US or UK.  Yet Japan has managed to take their toothbrushes to a whole new shiny level.  These new and improved versions have LED lights that are placed inside the brush itself.  Giving you a shining light to go directly into your mouth and shine on those pearly whites.

The LED light is said to somehow help with illness prevention.  It doesn’t explain that statement a whole lot, partially because it’s not always the best translation going from Japanese to English.  I’m sure if you could read Japanese, it might be a little more clear on that.  The design is supposed to be released at about the middle of May, so it should be fairly soon now.  It doesn’t give pricing information, but if you’re outside of Japan it’s going to be difficult to get your hands on this toothbrush anyway.