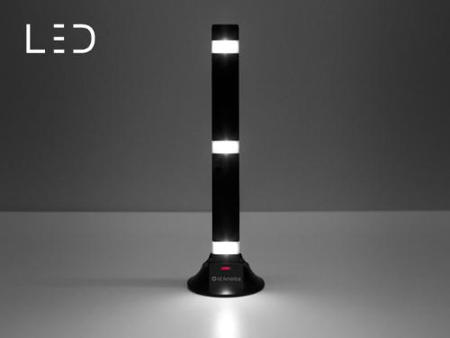 id America did introduce a Kickstarter campaign earlier this month that targeted the LED light-equipped portable charger of theirs, which has been called as the L.E.D. Nearly half of the goal amount has already been raised in the first week of the campaign alone, which is definitely an encouraging sign – hopefully it will be able to meet the funding goal in the coming week. The L.E.D portable charger is best described as a combination portable charger for personal electronic devices, while doubling up as an adjustable LED lamp to boot.

Running with a 5,200mAh lithium-ion battery located underneath the hood, the L.E.D. is capable of charging a multitude of personal electronic devices all the way to full capacity at their highest charging rate. This particular charger would be equipped with 5V1A microUSB input that it makes use of to juice itself up, and you will be able to plug in a gamut of personal electronic devices including the likes of smartphones, digital cameras, GPS devices and MP3 players if you so desire, allowing all of these to juice up thanks to a separate 5V2A USB output port. The 2A port would also let the L.E.D to charge even full-size tablets such at the iPad at their maximum charging rate.

Apart from being able to charge up mobile devices, the L.E.D would also deliver a different aspect that is essential to everyday life: and that would be light. The charger boasts of a trio of separate LED bulbs, which is more than what some of the other competing products in the market do come with, allowing you to make use of the L.E.D. in a wide range of projects or situations.

The LED lights are touted to be able to last for over 100 hours on a single charge, and it boasts of touch-sensitive control that enables the user to effortlessly switch between a trio of different brightness levels, depending on the situation that you are in at the moment. There will also be a pair of charging docks per charger, letting users keep one at home and one at the office to charge L.E.D whenever you need it most.