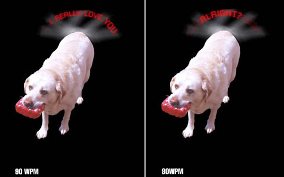 As the owner of a Labrador Retriever, I have to give this product some credit. After all, what dog owner doesn’t want to know what his or her dog is trying to say?

Unfortunately, this device is just a concept, probably because perfection of this technology would change the world as we know it. This LED Dog Tail Communicator is designed by James Auger and Jimmy Loizeau, and is on display at the Modern Museum of Art in New York City for the Elastic Mind exhibition.

As you can see, the tech works by LED lights that somehow blink as something gets waved. It’s the same technology that the USB Magic Wand uses. Only this one is programmed to give a certain message that is all dependent on how fast your dog’s tail wags.

As you can see, something to the extent of “I really love you” is displayed, but I could have told you that you’re dog is saying that without this device. I believe they are trying to make it so the dog will tell you that it is time to go outside.

This device kind of reminds me of a sign language glove that allowed an ape to talk in the movie Congo. In other words, this is a device that can bridge the gap between human and animal, which would change everything.