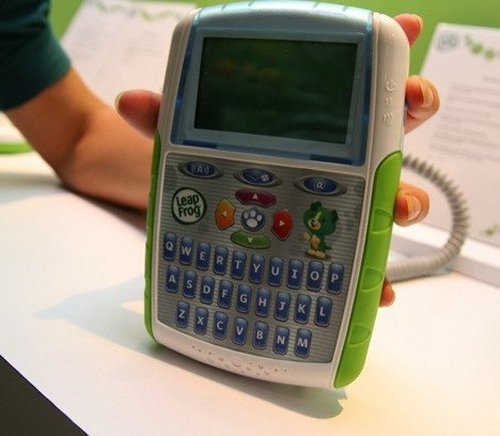 We’ve recently discussed Leap Frog’s new Tag Junior system, and the educational toy company isn’t stopping their new releases as they recently unveiled the “Baby Blackberry”. I use the quotes because this is not the toy’s official name, but its what other tech blogs are calling it. I think the only reason why Leap Frog hasn’t officially named this product is probably some trademark conflict from RIM.

As you can see, the Baby Blackberry is slightly larger than the actual Blackberry. That keyboard is a definite copy of the one that is on the popular PDA, but the little paw print doesn’t look anything like the mini-trackball.

Don’t expect any Wi-Fi connection to come with this guy, it is for looks only. I am guessing from the green pads on the side that Leap Frog make this Baby BlackBerry a lot more durable than the Adult BlackBerry.

So, what exactly does it do? It will help a children learn dates, phonics, and possibly a few games. I guess it really doesn’t matter what it has. This product is really made for when your toddler gets a hold of your real BlackBerry, and you have something to trade him or her for it so he or she won’t cry.

If this is something you want for your kids, to get them ahead of the mobile game by the time they are teenagers, be prepared to shell out £19.99 when it is released in August.