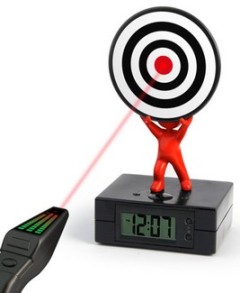 I believe that I have previously reported on alarm clocks that require some odd turnoff method before they shut off. For example, the Throw Alarm Clock requires you to bounce or throw it in order to shut it off.

This Laser Target Alarm Clock allows you to shoot it. That’s right, when the alarm goes off, the user readies the laser, aims, and fires.

I believe that the purpose of this clock is to give the user some great satisfaction as they shoot that most hated appliance. “Yes, by pulling out a gun on the Laser Target Alarm Clock, you can scare the daylight out of something that usually scares the daylight into you.”

All right, that isn’t a direct quote from the site, but the site does emphasize that it “fires up the brain to control and concentrate on the very exact hand-eye co-ordination required to aim your laser beam remote at the exact centre of the target”. In other words, by the time you pick up your knock-off Star Trek: The Next Generation phaser and shoot the target, your brain is definitely awake. No hitting the snooze bar here.