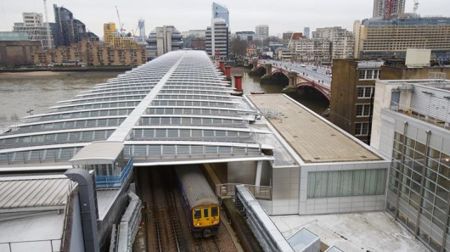 There is this particularly famous song that goes “London Bridge is falling down”, which is a ditty that I suppose most of us would know by heart. The city of London has plenty of bridges, actually, and London Bridge is not the only one. It seems that there is another addition to the number of bridges in that part of the world, which so happens to be a solar bridge. Not only that this is the world’s largest solar bridge, where it is called the Blackfriars Bridge. The Blackfriars Bridge happens to be part of the Blackfriars Station in London, where it has been fitted with 4,400 photovoltaic panels. The installation of these solar panels will hopefully reduce the station’s CO2 emissions by an estimated 511 tonnes (563 tons) annually.

Work on the Blackfriars Bridge kicked off in spring five years ago, and it is nice to know that the station has ended up operationally complete in time for the 2012 Olympics. Apart from that, it took nearly another year after that to complete the solar array installation, and by this year, the full refurbishment happens to be completed.

Apart from the solar panels being installed, part of the complete installation includes a new entrance on the south bank of the River Thames, a quartet of new platforms as well as an improved Underground station. The station happens to be one of the major points of a £6.5 billion (US$10.72 billion) Thameslink Programme, which has the intention of increasing train capacity on one of Europe’s busiest stretches of railway that runs from north to south through central London.

It uses Panasonic 250 Wp panels to soak up the sun, covering a total area of 6,000 sq m (19,685 sq ft). Sporting a maximum output that is estimated at 1.1 MWp (megawatt peak), this array of solar panels are tipped to generate 900,000 kWh of electricity annually, which is more than half the amount required to keep the station going.