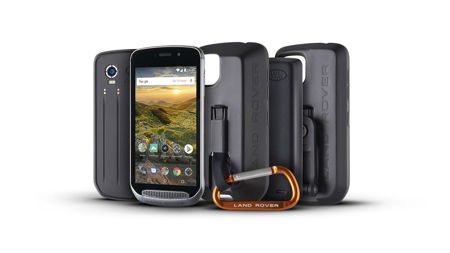 For those who love to tackle rough terrain during their free time, then a 4×4 is a must-have vehicle that will further encourage exploration to places off the beaten path. Well, the name Land Rover is synonymous with rugged vehicles that are able to bring you just about anywhere, and the company has decided to work alongside the Bullitt Group in order to develop the rugged Land Rover Explore Outdoor Phone. This handset was specially designed for people who live for adventure and yet require a handset that is capable of surviving whatever it’s put through, making it a notable entry to the world of rugged smartphones.

Right underneath the hood of the Land Rover Explore lies a powerful 4000mAh battery that is capable of delivering up to two days of typical use, or for the more robust power user, a full day of activities even with constant GPS navigation mapping activated on the 5″ HD display. The battery life can be further doubled through the use of the included Adventure Pack whenever you are on the move. Once it is added, it will do away with the need for a separate GPS device with its GPS patch antenna which will further improve the reliability and accuracy of the GPS. Of course, the Adventure Pack will throw in another 3600 mAh of battery power and premium topographic mapping via Skyline augmented reality.

The universal bike mount provides users with the flexibility of bringing the Land Rover Explore Outdoor Phone with them on their cycling adventures, while boasting of exceptional durability. It has been drop tested from heights of 1.8 metres with a factory fitted screen protector, allowing it to survive underwater, including salt water complying to IP68 rating. Extreme temperatures, thermal shock, humidity and vibration exposure are like water running through a duck’s back, allowing you to bring this through heavy downpours or a muddy trail without fear or worry of it breaking down.

The touchscreen can be controlled via wet fingers or even while wearing gloves, where improved connectivity options will be provided by a dual SIM feature so that users can hook up to a couple of networks simultaneously as and when required. Expect the Land Rover Explore with the Adventure Pack to retail for €649 per set with a slated April 2018 availability date.