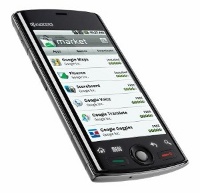 CTIA might be dubbed to be the poor man’s Mobile World Congress that happened in Barcelona earlier this year, but that doesn’t mean the event does not have its fair share of new cellphones and smartphones ready and waiting in the wings to be launched. Case in point, the Kyocera Zio M6000 which adds yet another handset to the Google Android OS stable. The Zio is touted to blend an elegant design with an ultra-intuitive user interface to unlock the vast array of content and applications in Android Market. This is also a landmark handset for Kyocera, as it marks the company’s return to the smartphone space which it helped to create nearly a decade ago with the release of two Palm-based smartphones, where the Zio is being prepared for a Q2 release later this year.

The Kyocera Zio will run on CDMA2000 1xEV-DO rev. A and Wi-Fi network technologies to help you stay connected to your family and friends, where it will feature an impressive, high-resolution 3.5″ WVGA motion-enhanced, touchscreen display as a backdrop, offering a fully customizable mobile multimedia experience. Apart from that, you will also find that it has an intuitive, effortless trackball which allows users to navigate through features in a jiffy including a 3.2-megapixel camera with 30fps video record/playback, media player, full HTML web browser, Google Maps support and numerous widgets and applications including Facebook, Twitter, Open Table and more available in Android Market. You are equipped with 256MB of internal memory – not too impressive when compared to other Android phones like the older DROID, but at least its microSDHC memory card slot can compensate for that shortcoming with another 32GB of storage space. There is also an ambient light sensor and accelerometer for easy viewing virtually any way, anywhere.

Other hardware specifications include a virtual QWERTY keypad, advanced voice dialing, a superior speakerphone, stereo Bluetooth and 3.5mm stereo headset jack, USB 2.0, and a dedicated camera key to have fun with apps such as PhotoVault and Google Goggles. It supports a wide range of audio, video and image formats including AAC, AAC+, eAAC, MP3, H263, H264, MPEG4, BMP, GIF, JPEG, PNG, and SVG. No idea on pricing though, and whether it will be carrier locked or not.