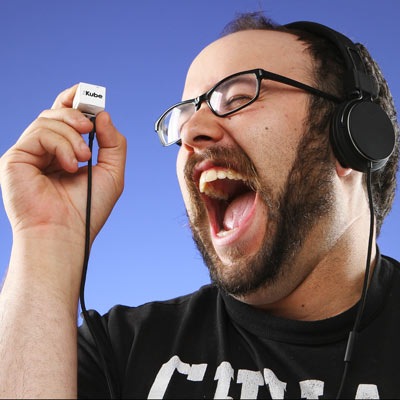 Everyone has an iPod anymore, which makes it far less cool than when Apple products were only used by a very small elite group. Those of you that are just absolutely sick and tired of blending in, now Think Geek has a solution for you.  Toss out that iPod and pick up yourself the Kube.  The Kube is a tiny little MP3 player that’ll hold quite a few of your songs.

Sure, it won’t show the songs that are coming up, nor does it really let you skip around, but that’s not much worse than having an itty bitty iPod Shuffle.  The whole thing only stands all of 1 inch tall and weighs 18 grams.  Once the built-in Lithium Polymer battery is all charged it is capable of playing continuously for 6 hours.  You can store up to 8,000 songs on the included 2GB Micro SD card.  It also comes with earphones, an SD adapter, a USB Cable and a handy little manual.  You can purchase it for $34.99 through Think Geek.