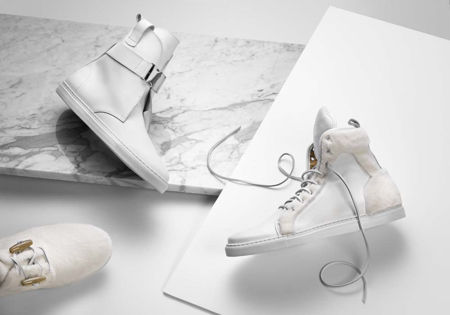 Fashion shows are all certainly full of jazz and plenty of action on the catwalk, and you can be sure that the latest season’s styles will eventually trickle to what we can see on the streets. However, there might be some new fashion that has evolved beyond what we are normally used to — and the folks over at Kopenhagen Fur has assured us of that by rolling out the new integrated athletic shoes over at the London Graduate Fashion Week.

In June earlier this year, Kopenhagen Fur integrated the seemingly unrelated elements in the London Graduate Fashion Week, resulting in a pair of sneakers that not only came with fashionable fur that are pleasing to the eyes, it has been merged to play nice alongside other kinds of high-tech elements.

This particular creation is a project designed by Kopenhagen Fur, Lenovo and China Academy of Art. It will merge the element of fur alongside intelligent sports equipment, resulting in a sense of tech and fashion into the pair of shoes, all the while transcending the original rigid design for athletic shoes. This particular pair of sneakers is truly the epitome of Kopenhagen Fur with a modern high-tech twist.

Being the very first pair of intelligent sneakers with fur, one can say that the most important element would be the included technology. Other than having basic functions such as counting the number of steps taken, it is also capable of interacting when walking with intelligent light-effects and music.

There is also the very real possibility of this pair of sneakers working alongside a collection of hardware, software and cloud based accessories, where users can collect a bunch of data via an app, which hooks them up to the cloud in addition to other apps, so as to connect the hospital, research institutions and personal health databases.

Definitely not your everyday pair of smart shoes!