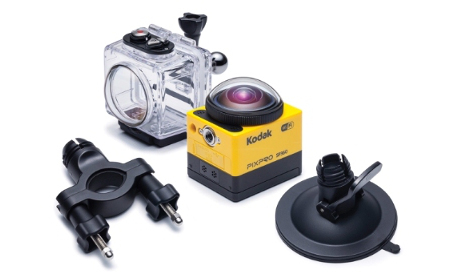 There are action cameras, and then there are action cameras – of a different nature, of course. The KODAK PIXPRO SP360 Action Camera would be one of them, where it is touted to be able to deliver interactive and immersive videos in a jiffy. JK Imaging Ltd., the worldwide licensee of KODAK PIXPRO Digital Cameras and Devices, also happens to be the creator of the highly regarded SP360 Action Camera, is currently working on YouTube’s recently launched support for 360-degree videos. You can be sure that there is quite some degree of excitement over the KODAK PIXPRO SP360 Action Camera, especially with the amount of bouquets that it has picked up along the way, placing it at the forefront of leading technology to assist YouTube content creators in sharing their world with 360-degree videos.

The KODAK PIXPRO SP360 is very special since it is one of only a handful of 360-degree cameras, where it will be able to play nice with the newly launched YouTube 360-degree format. The use of the PIXPRO free PC and Mac desktop editing software for the SP360 will enable video enthusiasts to transcribe any kind of video created via the KODAK PIXPRO SP360 Action Camera with but a press of a button to the YouTube 360-degree format, and you can then follow that up by uploading content seamlessly to your YouTube channel.

Paul Meyhoefer, Vice President of Marketing for JK Imaging Ltd., shared, “The unique, single lens of the KODAK PIXPRO SP360 Action Camera enables you to capture a spherical image, easily creating a highly interactive 360-degree video. Using the PIXPRO software to transcribe these videos, YouTube now easily allows anyone to share full interactive 360-degree videos with all their followers. We are extremely excited to have worked with YouTube to help support a platform for users to be able to create and share the next generation of interactive video.”