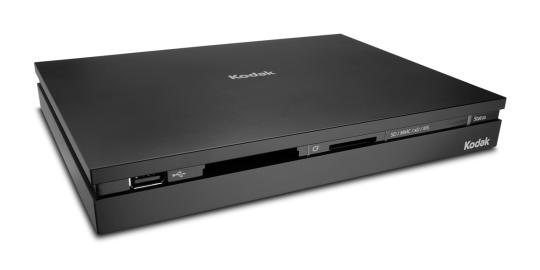 Eastman Kodak has announced a rival to Cupertino’s AppleTV. The Theatre HD Player connects to your HDTV and links to Kodak online galleries and Flickr via WiFi. This enables users to create slide shows and access them in glorious high definition.

Due to roll out in September, the Theatre HD Player will retail for $299.99 and continue to add features through firmware upgrades after it’s launched. The HD theater is fully interactive with the ability to display everything from video and stills, to audio and video podcasts, MP3s, and even YouTube style videos. Navigation will be through a wireless gyroscopic remote which will enable users to navigate screens much like a Wii controller. The interactivity will also allow users to edit their pictures directly and upload them to Flickr, YouTube and other galleries directly through the HDTV Theater.

Video is in 720p while still shots can be shown in 16:9 widescreen. But seriously, three hundred bucks? Can you receive channels as with an outdoor antenna? Does it play games? Does it record off my sat dish? Does it even have Blu-ray? Nope. There’s a lot more to life than YouTube and this is where AppleTV or any other streaming box has the advantage (save Blu-Ray, of course). If Kodak wants to serious hack away at Apple’s market share, they need to do it with price point and a better design. If the iPhone has taught the tech world anything, it’s that users love cool looking tech that performs. And they’ll pay for it too.