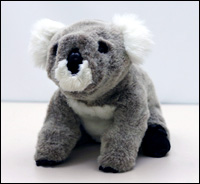 We all know just how slow sloths are, being even the subject of a proverb, but Korean scientists from the Electronics and Telecommunications Research Institute (ETRI) have managed to recreate a koala bear robot that ought to come in the form factor of a sloth instead. This robot might be slow and tiny, but it sure is big on the amount of technology packed within. Just imagine, poking its belly will startle the koala bear enough for it to wave its legs with its body still laid prone. In addition, it will turn its face in displeasure, in an attempt to see who the culprit was.

This fluffy robotic pet not only shows off emotional reactions to touches and voice, it is also capable of recognizing human faces. So far, it is the most advanced robotic pet made in Korea, although close, but is not up to par with those found in Japan and the US. Unfortunately, kids won’t be able to receive this koala robot for Christmas just yet as there are currently no plans to put it into mass production at the moment, although Kobie will surely be remembered as a pioneer when it comes to producing smarter, friendlier and more pocket-friendly robotic companions for us humans in the future.

According to Sohn Joo-chan, head researcher of ETRI’s Knowledge and Inference Research Team, “When you slap Kobie once, he acts as if he is surprised. But when you keep hitting him, then he begins to show that he is scared and frightened. He can calculate whether you like him or not.” I guess it doesn’t take too much to find that out since hitting something or someone repeatedly shows off your disdain to all. Kobie’s reactions are made possible thanks to its wireless communication function as well as embedded tactile, light, audio and posture sensors within Kobie’s puffy body. Signals received will be sent to a nearby server station that interprets these signals, sending back appropriate orders to Kobie’s body.