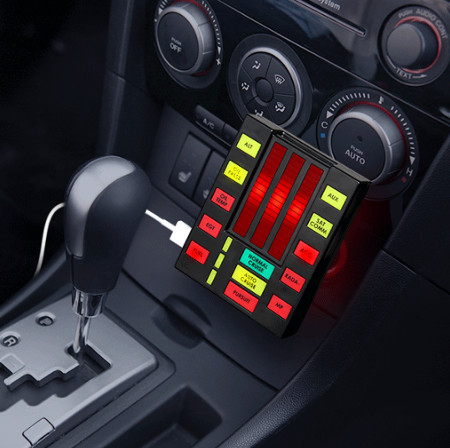 Sure, we have the likes of a smartphone, a smart home, and how about a smart car? I suppose that would have something to do with a driverless vehicle which has already begun testing in the US. Speaking of smart cars, the prototype model would be the Knight Rider K.I.T.T. from the 1980s, where that TV series certainly every kid wish he would have a ride like that when he grows up and is able to earn enough money. Well, we are still very far from such a ride in reality, but this does not mean that you cannot have a semblance of Knight Rider in your existing car. The $29.99 Knight Rider K.I.T.T. USB Car Charger would let you be the ‘Hoff, at least in your mind.

It resembles K.I.T.T.’s voicebox from the TV series itself, where the light bars themselves will synchronize according to the audio which will then play back 11 different phrases. Of course, this purchase does not come with a 1982 Pontiac Trans Am, that goes without saying. The Knight Rider KITT Car USB Charger will feature not one, but a couple of USB ports, where each of them is capable of charging almost any USB-powered device as both deliver 1.0 Amp of juice. This is an officially licensed Knight Rider product and at the same time, is a ThinkGeek creation and exclusive.