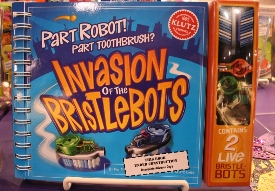 For those of you who aren’t familiar with Bristlebots, they are some homemade tech that debuted on the gadget/tech blogosphere in late 2007, involving nothing but toothbrush heads with directional bristles, cellphone-vibrator motors, and small batteries. Gadget blogs everywhere have been literally buzzing with video footage of these tiny guys moving around like artificial insects.

It appears the company Klutz has taken advantage of this new fad with a new book called Invasion of the Bristlebots. The book itself comes with “2 Live Bristlebots” that have “more zip, wilder action, and a control that lets you adjust a Bot’s behavior”. I’m not certain what is in this book, but I’m guessing it will open up to reveal some private Bristlebot battle arenas.

There is a problem with Klutz publishing and Windall H. Oskay, the man who originally invented the Bristlebot and posted it on a site known as Evil Mad Scientist Laboratories. When he first heard about Klutz’s newest book, he was surprised that the Klutz company did not contact him before they created it. Hmmm…I smell a lawsuit brewing.

The Invasion of the Bristlebots was only just recently unveiled at the New York Toy Fair. There is no word on the release date, availability, or a price.