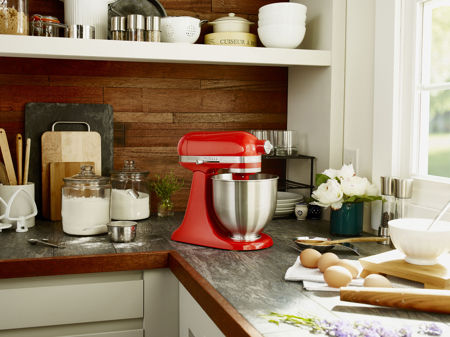 If you spend much of your time in the kitchen, and have found plenty of recipes that make use of a mixer, then I am quite sure that you would have had given a go with the KitchenAid Stand Mixer before. Well, here is one bit of exciting news that you might want to take note of if you are a Stand Mixer fan, that is, the KitchenAid Artisan Mini Stand Mixer is all set to roll out later this summer. It will bring with it the power, iconic design, color choices and endless possibilities that have always been synonymous with this culinary workhorse.

The brand new Artisan Mini Stand Mixer will follow up the summer US launch with a global launch as well, although the exact schedule is yet to be known. It wil be able to offer the similar amount of power and performance as the brand’s Classic Stand Mixer, where the Mini Artisan mixer will boast of a 3.5-quart capacity and is 20% smaller and 25% lighter. Not only that, it will then join a collection that includes 4.5-, 5-, 6- 7-, and 8-quart models, and would represent a milestone experience, that is, the first downsizing of the Stand Mixer since 1962.

The asking price for the KitchenAid Artisan Mini Stand Mixer? $399.99 a pop, if you are interested. Just how well does the KitchenAid Artisan Mini Stand Mixer function? It is said that this new model will be able to quickly and efficiently mix and knead ingredients for up to five dozen cookies or a loaf of bread. In comparison, the 5-, 6- and 7-quart mixers can accommodate from eight to 12 dozen cookies or two to four loaves of bread.

It will not differ too much from its larger siblings, as the Artisan Mini model will also come with a flat beater, wire whip and dough hook, all of them right out of the box, while accommodating all optional hub-based attachments that are available for larger models. Existing hub attachments will include everything from a spiralizer, pasta maker and food grinder to a food processor and juicer.