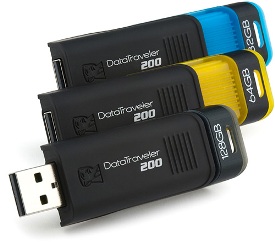 I’m surprised that no one has covered this already, but Kingston has some new Flash drives that come in 32GB, 64GB, and a whopping 128GB!

I’m told that the DataTraveler 200 is the very first 128GB flash drive on the market. Of course, I always get suspicious when something says “world’s first” on it. Usually it ends up not being the world’s first of anything, but just the company who could spend the most money on promotion.

One of the things that make these flash drives unique is they don’t have any easy-to-lose caps, but the USB end can retract into the housing itself. They also come with Password Traveler security software for Windows computers, and are Windows ReadyBoost compatible.

So is this the beginning of a new age of flash drives? Who knows? I can honestly say that they are getting to the point that they are tiny portable hard drives. If you head over the Kingston site, you won’t see any information about these particular hard drives, but you will see a lot of info about other types.