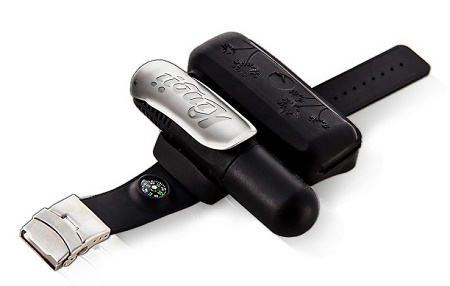 Swimming can be a daunting summer activity to many, especially parents, because of the nerve-wracking risk of drowning. It can be tough to allow your children to have fun when also wanting to ensure their safety, and some of them are just too big for floaties, either in pride or in body.

After the death of his friend, Tom Agapiades made it his mission to address water safety by inventing the Kingii, a small apparatus that is attached to a bracelet and worn around the wrist. The Kingii may have quite a few moving parts, but is fairly simple–in the largest chamber lies an inflation bag, and on the opposite side is a small cartridge of CO2 that is used to inflate the bag. Between them is a silver pull lever, which triggers one to interact with the other upon use. Once the inflation bag is released, a small whistle can be found dangling from the side to get anyone’s attention.

The bracelet is also equipped with a compass for use in whitewater rafting or other scenarios that aren’t quite as predictable as a community pool, which make it handy for more outdoorsy adults as well as children. The Kingii has met and exceeded its goal, being nearly 700% funded before the first week of the campaign even finished. For those interested in investing, the Kingii is available at the $79 level, which includes the device itself, as well as two CO2 cartridges.

You can find the IndieGoGo campaign here!