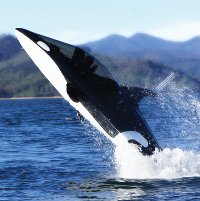 Killer whales are supposed to be ferocious hunters of the sea, but anyone who had watched Free Willy all those years ago would surely have wiped away a tear or two by the time the movie ended. It does not matter which side of the fence you are on, killer whales are definitely lean, mean, killing machines underwater – but only out of necessity and to survive. These beautiful mammals have been immortalized this time around in the form of the Killer Whale Submarine. The asking price for such a ride? A whopping $100,000.
This underwater ride will only carry two people, and it won’t chew its way through anyone actually. The pilot will be protected beneath its watertight 0.5″ thick acrylic canopy, where twin control levers are pushed and pulled to articulate the whale’s pectoral fins for rolls and stealthy dives. Dual foot pedals are able to control the vectored thrust of the craft’s 255-hp supercharged Rotax axial flow engine, offering the experience of realistic killer whale behaviors such as porpoising or skyhopping. When submerged, it will be able to cruise up to 25mph, and its dorsal fin’s integrated snorkel will be able to deliver air supply to the engine up to a depth of 5′.