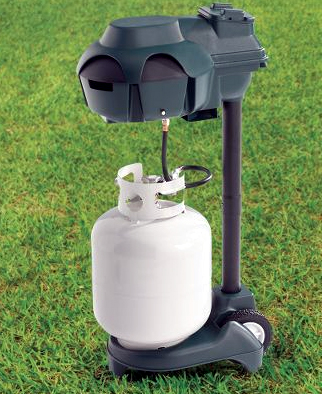 I’m glad that the weather is starting to turn warm, because at heart I love the outdoors. While I don’t spend nearly as much time outside as I did as a kid (yes, even with access to computers and video games I would still choose to play outside) I still try to find excuses to go outside. Unfortunately the mosquitoes also love the great outdoors, and they love me. While their annoyance isn’t enough to prevent me from stepping out the door, it certainly doesn’t add to my enjoyment. So here’s an unusual gadget meant to keep those pests away.

I’m sure that plenty of you have a propane tank at your house. However, I seriously doubt that you’re using it to kill off mosquitoes. This Propane Mosquito trap is meant to do exactly that. It uses CO2 released from the tank to attract the pests (which apparently think it is a human exhaling) then are further attracted by octenol (apparently they like that stuff) and are then vacuumed up and die.

I have to say that this product is strange, however, if it can drastically cut down on those pesky bugs for an entire acre, then it might just be worth it. You’ll need some deep pockets to find out though, as it will set you back $500.