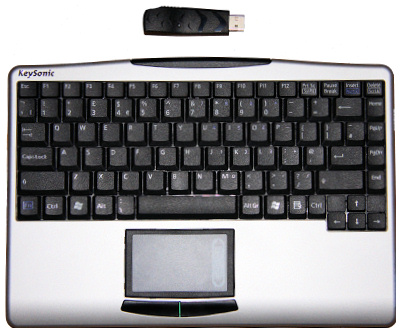 Recently I bought a Mac Mini . It’s finally usurped my trusty Xbox Media Center as a next generation Media Center PC and will doubtless receive a writeup of it’s own one day.

Great though the Mini is, you still need a keyboard and mouse to control it and that’s the subject of this post. The thing is, with a PC in your living room you don’t really want a keyboard trailing a wire across the room. You don’t really want to balance a separate mouse on your lap or the arm of the chair either and that’s where the Keysonic ACK-540 RF wireless keyboard comes into play.

The 540 is a small, very light wireless keyboard with – crucially – an integrated laptop style trackpad to control the mouse functions. The keyboard layout is a fairly standard laptop type. There’s no separate number keypad but they have managed to fit a windows key (used as the “Command” key in Apple-land), a full set of function keys and dedicated keys for Home, End, Page up and Page down.

The wireless transmitter takes the form of a small USB dongle (shown at the top of the photo). To get it working I just put the (supplied) batteries into the keyboard, plugged the transmitter in to a spare USB port and started typing – there were no drivers to install, it just worked straight out of the box.

The trackpad has a separate section on the right hand side that emulates the scroll wheel of a mouse – again, this is pretty standard laptop-style usage and works well in web browsers for scrolling down the page.

The keyboard “feel” is good. The keystroke is light with not much travel but the keyboard feels solid so you never feel like you’re going to damage it by heavy handed typing.

I only have 2 complaints:

Anyway if you’re in the market for a keyboard to control a media PC or just fancy being lazy and surfing from the couch this keyboard deserves a look. I got mine in the UK from Ebuyer