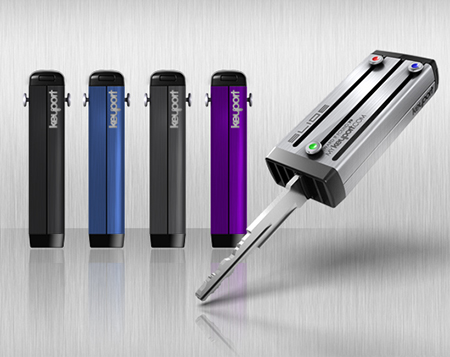 A few years ago, we introduced you to the Keyport Slide. This was an interesting new take on the keychain. Rather than having a bunch of bulky keys in your pocket, this offered a way to cut down on the bulk, and put them all into one smaller package. What you were left with was a gadget about the size of a pack of Tic-Tacs that held up to 6 of your keys. Well, the Keyport is back, and better than ever.

I actually owned the original Keyport, and while it was nice, there were areas where I felt it could improve. One was the metal housing. It actually felt a bit flimsy, and I always worried that one of these days I would break the whole thing while unlocking my stubborn front door. (I actually ended up losing it before that ever happened, naturally.) It also didn’t have a good ay to keep a fob, or other bulky keys attached to it, which was a bother.

The new Keyport 2.0 has addressed both of these concerns. The body is now constructed from Ultem, which is a resin that’s much stronger than the metal used before. They claim that it’ll survive getting ran over by a car, without any issues. It also has a spinner cap on the end, which makes it easier to attach things like car fob, or other things that you might have carried on an ordinary keychain before. You’ll be able to get one for yourself for just $40. Currently there is a waiting list for pre-orders, which you can get on here.