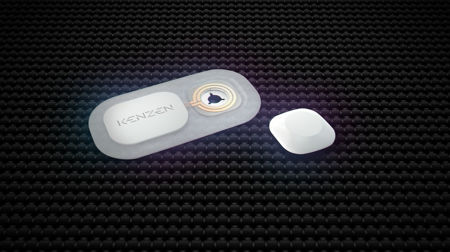 When it comes to activity trackers, this is one particular niche market that is growing – and fast. It does not matter whether the activity tracker is for a child or otherwise, but the Kenzen ECHO H2 would be able to offer a whole lot more than just to track the activity that you are involved in at the moment. For fitness buffs who would love to have something that can maximize one’s training and endurance, the Kenzen ECHO H2 does a whole lot more than to count the number of steps that you have taken and to keep track of workouts.

The Kenzen ECHO H2 has been touted to be the industry’s most complete smart patch wearable which is capable of tracking just about everything from basic fitness to real time monitoring of an athlete’s hydration, lactic acid and glucose levels. This is a combination of a reusable sensor as well as disposable smart patch which will be able to make use of a single bead of sweat for real-time analysis.

It will be able to adjust workouts that are sent to a user’s smart device, and being developed in Switzerland for medical research purposes, the printed electronics technology has been repurposed into a thin, flexible wearable that is smaller in size compared to that of a quarter. The company itself revealed the ECHO H2 in the form of an Indiegogo campaign, where they intend to raise $75,000 for product integration and initial manufacturing purposes. Those who place a pre-order for the smart patch will receive their ECHO H2 with all future sensor functionality that will be turned on – for free. Not too shabby an exchange, don’t you think so?

The printed adhesive biochemical on the Echo H2 will communicate through low-energy Bluetooth with other compatible smart devices, including smartphones and watches. There is a customizable array of activity and physiological sensors which can be unlocked via in-app purchases depending on each user’s unique needs. Anyone interested?