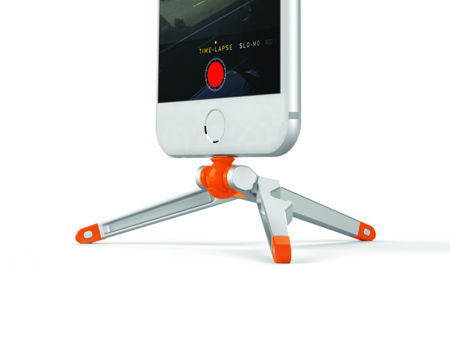 When it comes to snapping photos these days, many of us tend to make use of our smartphones more than actually to carry around a dedicated digital camera. There is a very good reason for this – digital cameras are not only large and bulky, it can also be another target for thieves to nick it off you when you least expect that to happen. Apart from that, the digital camera on your smartphone has advanced to a point where casual images already look great, but there are still challenges to overcome in low light conditions. Still, the iPhone from Apple is one particular handset that comes with a highly rated digital camera, and hence, why not release a tripod for it so that it can shoot some still shots without any image blur, especially in the evening and at night? Kenu has just revealed their Stance compact iPhone tripod that you might just be interested in.

Kenu happens to be the manufacturer of the Airframe and Airframe+, as well as portable car mounts for smartphones and phablets, and the Stance is their first tripod that has been specifically designed for the iPhone. It will be mounted directly into the iPhone’s Lightning port thanks to Kenu’s patent pending MicroMount, where you are now able to watch your favorite videos, using FaceTime, as well as position your iPhone’s camera so that it can capture amazing photos and videos, making life easier than ever before.

Not only that, Stance will jive with the rest of the iPhone’s mantra, being small and compact, not to mention easy enough to bring with you anywhere and everywhere you are. It tips the scales at only 1.2ozs (34g) and it is smaller compared to a pack of gum. There are non-slip feet and premium zinc-alloy construction that helps create a stable base. Apart from that, a ball-and-pivot joint would let the phone tilt and rotate freely, enabling you to position your iPhone at the perfect angle. This is not the first tripod for smartphones ever, and neither will it be the last.

Stance will be released for $29.95 a pop on Kenu.com and at premium retailers worldwide from early next year onward.