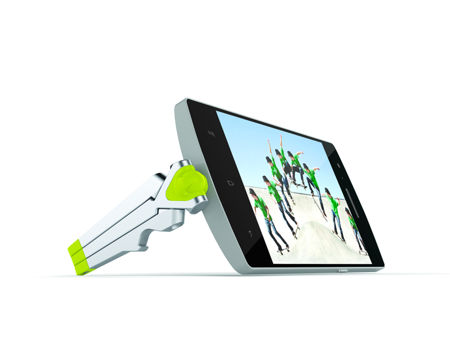 For those of you who simply cannot live without your smartphone, as that is not only your primary tool of communication, but it also happens to be your portable media player of choice whenever you travel, perhaps you would have already explored the possibility of picking up a smartphone stand so that you can watch your favorite shows on your smartphone while you are traveling without having to trouble your hands – after all, a pair of free hands would definitely come in handy to help scoop some popcorn into your mouth, right? Kenu has had its fair share of experience with accessories for the likes of smartphones and phablets in the form of the Airframe, Airframe+ and Stance, and here we are with the Stance for Android and Windows smartphones.

Stance is basically the very first tripod that has been specially designed for Android and Windows handsets, where one will be able to mount it straight into the Micro-USB port thanks to Kenu’s patent pending MicroMount. With the Kenu Stance, you will be able to enjoy your favorite videos, making video calls, as well as positioning your smartphone’s camera in order to shoot amazing photos and videos in a far easier manner than ever before.

Not only that, the Kenu Stance is also tiny and compact, which makes it a whole lot easier to bring with you regardless of where you are. It tips the scales at a mere 1.2ozs (34 grams), and so happens to be smaller in size compared to a pack of gum. There will also be non-slip feet as well as premium zinc-alloy construction in order to create a stable base. Apart from that, a ball-and-socket joint would allow the handset to tilt and rotate freely, so that you can have the smartphone pointed at the perfect angle.

The versatility of the Stance also cannot be understated, as when it has its legs folded flat, the Stance would be able to position your handset so that you can watch videos and snap photos in landscape mode. Heck, it even includes a bottle opener in one of the legs just in case you need to relax. Expect the Stance for Android and Windows phones to retail for $29.95 a pop when it arrives at premium retailers worldwide sometime early next year onward.