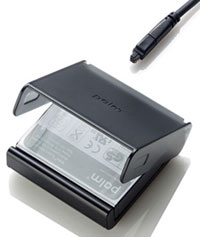 While the Treo 680 and 750 smartphones might come in a sleek package without the unsightly antenna, they also utilize smaller capacity batteries when compared to previous iterations of the Treo line which results in a reduced battery life – a dire situation if you’re a power user who constantly has emails to reply while on the road, juggling tasks like making phone calls and sending memos while hurtling down the freeway at speeds that would make a traffic cop choke on his donut. What better way to remedy this situation than by carrying a spare battery with you on your travels? Just make sure that this spare battery is always charged, which is where the Treo Battery Charger comes in handy.

The Treo Battery Charger comes in a small brown box that keeps your second Treo battery charged separately from the phone, and utilizes the very same ‘Athena’ power connector as your Treo in order to eliminate extra adapters. The Treo Battery Charger comes with a flip lid that closes the battery when the latter is fitted snugly inside. There is a power connector located at the back of the Treo Battery Charger, while the presence of a tiny LED lets you know whether the battery is still charging or is full and raring for some action. As always, red indicates charging is in process while green gives you the go ahead to swap batteries.

Those who carry the newer Treos (680 and 750) ought to seriously consider the Treo Battery Charger that retails for $19.99. After all, you can never quite tell when you’ll need the extra power on your travels. This is where the age old adage, “Better safe than sorry” comes into play.