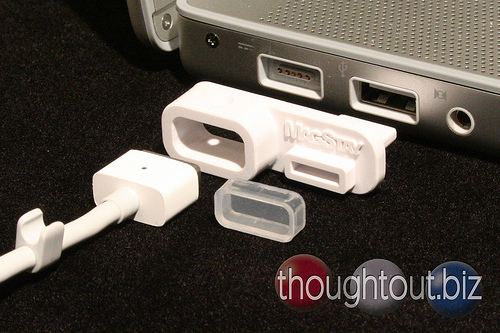 My wife has a MacBook that I borrow from time to time. Now and then when I’m using it while plugged into the wall I’ll accidentally unplug the MagSafe power adapter. It’s really not a big deal, as it pops back into place rather easily. My wife, however, hates it when she knocks it out. I don’t really understand this obsession with having the plug stay in at all times, but at least I’ve found a simple gadget that will prevent it from happening in the future.

This is one of those things that you know the company that designed it will make a small fortune. It’s a simple piece of plastic that probably costs peanuts to make, yet provides a function that tons of people are going to want. You just plug it into the neighboring USB port, and it keeps your MagSafe adapter in place until you’re really ready to take it out. It’s cheap too, just $11.99.