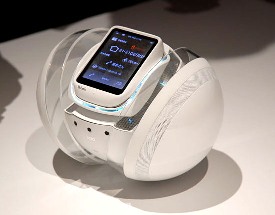 When I first saw the iida Polaris from KDDI, I thought the idea was to put your cellular phone in a ball like a hamster so it is free to roam about the room. Of course, that is kind of silly, isn’t it? It’s not like your phone is a living thing that wants to explore.

Of course, we live in a technological age where designers often make things simply because they can, and I was actually willing to believe that rolling is what the iida Polaris does. Sadly, my dreams of a cell phone hamster ball mechanism were shattered as I discovered that the ball apparatus only serves as a cradle, not a transport.

When the user puts the phone in the cradle, it begins a process of collecting data such as healthy food suggestions, business news updates, and weather information. The user can open the fancy lid on the Polaris and use the phone as a remote control in order to access their television.

You might be asking why in the world someone would need a robotic cradle to do that. You are not the only one. After all, Unity4Life offers similar controls from a BlackBerry. As far as a phone goes, it looks like your typical touchscreen only phones that have been so popular since that one that starts with an “i”.

The iida Polaris is still in concept form for now, but unless that cradle does make it roll around the room, I’m not convinced it should be put into production.