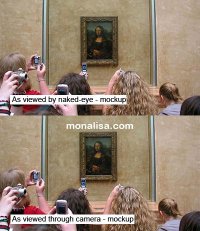 It seems that cameras of yore and even digital cameras of today tend to snap additional information during a photo shoot compared to what our normal eyes can see. Most of the time, these strange snapshots often depict the supernatural – such as a person who has died a long time ago or even a hideous looking apparition that sends your skin crawling whenever you take a look at it. While many who believe claim that these are not doctored images or deliberately concocted scams, you would be interested to know that technology exists today which enables you to show off your artistic streak that will only be revealed when a photo is taken. This technology is known as Kameraflage, thanks to the silicon chips within digital cameras that enable you to see a broader spectrum of light that is invisible to the naked human eye.

Connor Dickie and Sarah Logie, inventors of Kameraflage, designed it to cater specifically for camera phones. There are several theoretical applications for Kameraflage, including movie producers who might want to include another layer of text (such as subtitles) into the screen only for those who want it. They must, of course, view this using a camera phone, and I personally feel that this idea is pretty silly since holding up your camera phone throughout the entire movie would be pretty tiring. Alternatively, Kameraflage could be used to include additional information regarding an exhibit only when visitors take photos of it.

The implementation and widespread use of Kameraflage could result in people snapping photos at random which could be unnerving at times, but the advertising industry would probably see this as an opportunity to further expand their horizons. What about clothes that have different messages embedded within them? That would surely freak mom out when she sees what her children are wearing in a family portrait.