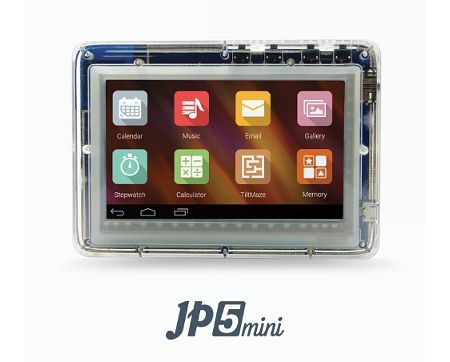 When one stays in the slammer, the choice for entertainment would be extremely limited, that is for sure. You would most probably want to kill your time by reading books or exercising in your cell, but other than that, access to electronic devices might be restricted or extremely limited, too. What if we were to tell you that there is such a thing known as a tablet for inmates? JPay is the one behind this idea, having announced the official release of the company’s next generation inmate tablet, calling it the JP5mini.

The JP5mini will be able to bring along with it the entire slew of JPay’s products and services, although it will now be running on an Android-based operating system, and needless to say, it will be highly customized for the prison environment. What’s a tablet without apps, anyway? Hence, this JP5mini tablet will come with a slew of new apps, as well as an enhanced email experience alongside the new operating system, empowering JPay’s development shop to deliver more apps at a much higher frequency. Not only that, the JP5mini will come with built with Wi-Fi capability in order to accommodate facilities that are transitioning to wireless networks.

This is not the first time that JPay has rolled out a tablet for inmates, as they have done that before with the hugely popular JPay JP4 tablet that is currently in the hands of more than 60,000 inmates. The JP5mini will continue to maintain the same compact size of 4.3”, which is an important convenience factor taking into consideration the constant movement of inmates while in prison. The tablet will come packed with a dual-core processor, where it will allow users to handle multiple tasks, as well as lengthen battery life for inmates to enjoy more than 35 hours of music and watch 12 hours of video. Underneath the hood, lies up to 32MB of storage (yes, you read that right! It is like 1995 all over again), crisper graphics and a modernized email program.

Designed for rigorous use, it has been drop-tested from 30-feet to ensure maximum durability – hopefully it won’t be used as a weapon to knock someone’s lights out in a prison riot!