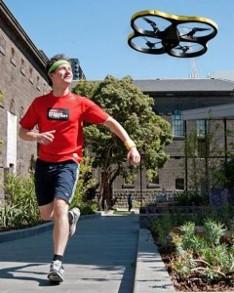 Some of us prefer to exercise alone, while others tend to want the company of others, as it makes the entire activity more communal-like, and hence, more fun – in theory, anyways, especially when everyone in the group are able to jive with one another. For those who are Forever Alone joggers and desperately want a companion but have never managed to find one, perhaps the Joggobot can help you out. The Joggobot is an aerial robot that will fly alongside you as you pound the pavement, motivating you in the process. Is it me, or has humanity dropped to such a level where we envisage the day where robots might even be the ones to send us off on our last earthly journey into the afterlife?

Basically, the Joggobot will hover a few feet in front of the jogger to provide encouragement. Currently under development by a team at the Royal Melbourne Institute of Technology in Australia, you are able to programme the helicopter via a smartphone app in order to control the kind of pace and height it will remain at. There is a camera located on the drone itself which will lock onto a blue and orange marker on the runner’s shirt, making sure that it sticks to the runner like a barnacle clinging on to the side of a ship.
It would be a hoot to see what happens when the jogger – say a marathon runner, actually outruns the Joggobot as the Joggobot’s battery reserves are finally fully drained out. What do you think – would you want a modified AR.Drone to actually follow your trail, urging you on in a mechanical voice (I suppose it is also easy to replace that with a human female voice), or do you still want a human being to tag along, where you can also voice out complaints and grievances about life to him or her? This robot can’t hug you back, that’s for sure.
Source