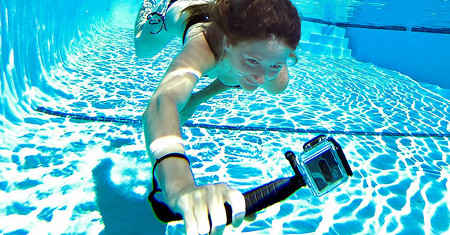 When it comes to shooting videos or photos with your smartphone camera, more often than not the angles will be limited, due to the fact that you cannot set a timer and place your smartphone on just about anywhere since there is not much thickness on the handset’s chassis itself for that to happen in the first place, quite unlike a dedicated digital camera. An action camera might be thicker than a smartphone, but it does have its fair share of limitations, too. Having said that, there are accessories out there which will make creative photo shooting with your action camera possible, and JOBY is one such company that does just that. In fact, they have just introduced the new Action Grip and Action Grip & Pole accessories that will be able to play nice with any action cam, as it enables consumers to expand their reach and create new perspectives for action shots.

For starters, the $24.95 Action Grip happens to be a floating hand grip which will be able to help you in shooting photos or video with any action camera. This is a hand-held tool, and consumers can feel free capture footage while swimming, surfing and diving without ever fearing of losing their device during the activity, as there is the presence of a floating handle with built-in tether in order to help secure the grip at the wrist. There is also a removable end cap which enables the addition of a pole or broom with a standard painter’s pole thread.

As for the $34.95 Action Grip & Pole, this happens to be a complete, out-of-the-box solution for action cam shooters who would want to capture longer range of shots and angles. This unique bundle will include the hand grip in addition to a modular, 18” aluminum extension pole. Since both pieces are able to float, consumers can make use of all pieces in and around water. There is also a removable and threaded end cap so that one can add on multiple poles to extend the reach and increase the creativity of action cam shots.