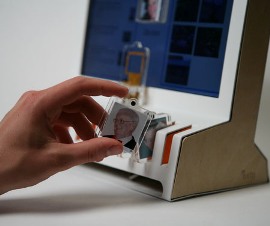 Since I was born in 1971, I am of the X Generation. I learned to adapt to all that computers starting doing in the Internet boom of the mid-nineties. I am always amazed at how much Generation Y can do on social networks like Myspace and Facebook.

Here is a disturbing image for you: Fifty or sixty years from now, this Generation Y will be on their computers in the rest home, logged on to whatever social network will be popular by 2050.

I don’t think that I could ever get my 67-year-old mother on this tech, but I could always try with the Jive, a social network for the elderly.

The Jive interface is set up with a bunch of slots on the bottom, so a user can “plug into” their friends. As soon as the friend disc (which can actually have a picture of the person on it) is plugged in, it would be like entering someone’s MySpace or Facebook page.

I suppose that it doesn’t get easier to socially network than this. I am surprised that the designer of the Jive doesn’t make this for younger kids. My five-year-old daughter would probably be addicted to it on the first try.

The designers try to market this to the elderly, I would highly suggest not calling it “Jive”. I have been to a few rest homes in my time, and I have never seen them “jive-talking”. In fact, that’s another image that is a little disturbing.