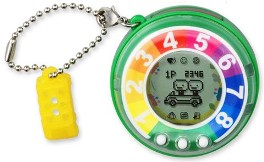 You may look at this picture and wonder if the Virtual Pet is making a comeback, but it is actually something new altogether with the Jinsei Game Punchi.

Takara Tomy is releasing this electronic game to celebrate Jinsei, which we know as the game of Life. I’m sure all have you have at least heard of the game of Life, where you have to make money, get a house, have kids, all with that really odd spinner. In other words, it’s your life, but in game form to make it fun.

The Jinsei Game Puchi takes this game of Life to the next level as you must take 300 steps before the spinner will spin. There is a pedometer to measure the amount of steps of taken, but I suppose cheaters could just shake it.

In other words, this is a game of Life that you have to walk out! Just like life! Unlike life, the user interfaces with the game with something that is reminiscent of a tamagotchi, so you will live a virtual life in this virtual pet style of play.

I’m wondering if this Jinsei Game Punchi is just the beginning. Perhaps they will make a similar version of Monopoly that involves you walking around real properties, railroads, and utilities, spending real money.