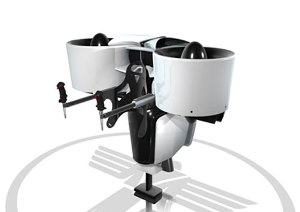 it’s been a while since we covered designer Glenn Martin’s super fan pack, which I suppose is, for lack of a better word, a jetpack. Granted, it looks more like the flying pack seen by Quest Aerospace in the first Spider-man movie rather than the jetpack in the Rocketeer, but it can get you off the ground, and quite safely, too.

I believe that I reported last year that these packs were $250,000 each, but that was actually wrong. One of the people on the Martin Jetpack team sent me a comment that the jetpacks were actually 100,000 USD. There is a video after the jump if you want to see more about it. I couldn’t think about something more fun than strapping my 360 camera onto it and taking off in my garden.

I believe that only ten jetpacks were produced last year, and I can only imagine that celebrities who have more money than they should could be the only ones that could afford them. A recent update by the Telegraph has revealed that the Martin Aircraft Company is teaming up with an unnamed international aircraft company to make 500 jetpacks a year, for a lower cost of $75,000 each.

Yes, it is a high price, but here’s what you get. First of all, it runs on premium gas, which is much cheaper than jet fuel. Second, it has a 30 mile range at 60 mph with a 8000 foot ceiling. Third, no pilot’s license is required. Fourth, it has a low altitude ballistic parachute, in case you are worried about safety.

So, with 10 jetpacks last year, 500 in the next year, that means Martin has increased its jetpack inventory by 50 times. If it keeps this up, it will take four years to have 3,125,000,000 jet packs, which is enough for about half the planet. So are we looking at an era where everyone will be flying around in a jetpack soon? One can only hope.