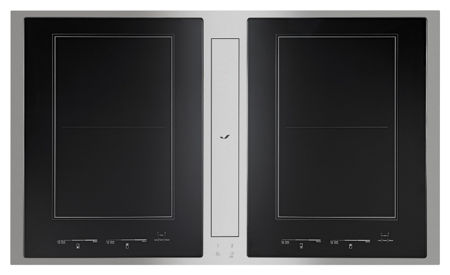 Jenn-Air, the luxury appliance maker, continues to break new ground as it merges its downdraft expertise with induction cooking technology, allowing the company to introduce its first induction downdraft cooktop that is tipped for a release some time later this coming summer. This is a brand new 36″ cooktop that will be able to deliver the responsiveness of induction cooking, although it will arrive aided with Jenn-Air brand’s powerful downdraft ventilation technology.

Induction happens to be a cooking technology which continues to gain in popularity, as it makes use of electromagnetic energy in order to transform cookware into the heat source itself, delivering instant heat and precise temperature control. As the cookware itself becomes the heat source, the area around each element will remain cooler, and Jenn-Air cooktops with induction technology will be able to deliver a level of responsiveness and efficiency that outperform electric and gas.

The design of this Jenn-Air offering delivers an advantage in the form of downdraft ventilation, where its location is directly on the cooktop, and it makes use of proximity ventilation in order to capture smoke, steam and odors at the cooking surface, whisking them down and out for a fresher, cleaner kitchen. There is an exhaust capacity rating of 350 CFM in a ducted configuration, where the downdraft blower has been designed with centrifugal fan technology in order to both quickly and quietly ventilate cooking vapors. As for those who are unable or prefer not to run ductwork or vent smoke outside, they can always settle for the brand’s duct-free option which will fall back on a powerful filtration system to capture smoke and steam.

Sporting a couple of flexible induction cooking areas, each of them will deliver a powerful 3,700 watts, the cooktop is able to accommodate up to half a dozen pots simultaneously, where intuitive, sensor-driven pan detection technology ensures an element will only activate when appropriately sized cookware is placed upon it. There is also a bridge element technology that is featured on both sides of the cooktop offer further flexibility for longer cookware, such as griddles or Dutch ovens. The all new Jenn-Air Induction Downdraft Cooktop is not going to come cheap though, as it will retail for $6,999. But hey, doesn’t it look just swanky in your home!