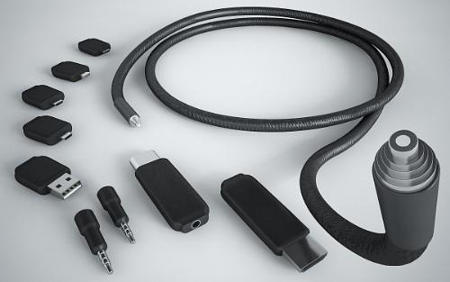 The modern day road warrior will obviously have a slew of mobile devices that they work around with, and this goes without saying that there is a need to carry their corresponding chargers and cables along with you whenever you travel. This might eventually translate to a whole slew of items, and it might also be easy to get mixed up with which particular cable belongs to what device, especially when you carry a digital camera, a smartphone, a tablet, a GPS navigation device, a smartwatch, the works! Here is a specially designed connector that snaps to various adapters, knowing as the TOB cable.

Thanks to the folks over Janulus, the TOB cable is so unique, that it makes it easy for one to hook up their devices together with a single cable – ensuring that this particular cable, too, is portable enough for you to tote around in your pocket. Making good use of all the best of today’s technology, it will play nice with the rest of your gadgets, and will also come with its fair share of capabilities that will be able to evolve with the future advances.

It is hoped that the TOB cable might eventually end up as the new standard when it comes to our gadgets, and who knows? It might actually end up creating a future where all our gadgets communicate in the same “language” via the TOB cable. Being touted to be the perfect travel companion, the TOB cable will just require you to pack only a single cable that then would help fulfill all of your needs. It does not matter what you are going to use the TOB cable for, you can use it to charge up your handset, listen to music, play videos from your phone to a TV, or even transfer photos to your computer at maximum speed. Heck, why not use it to juice up or update your GPS navigation device while you are at it?

Specially designed for fast charging, the TOB cable would help you shave off time waiting for the device to charge, especially when you are running on a particularly tight schedule. This is because the TOB cable was made using heavy gauge wires which are capable of handling the higher current.