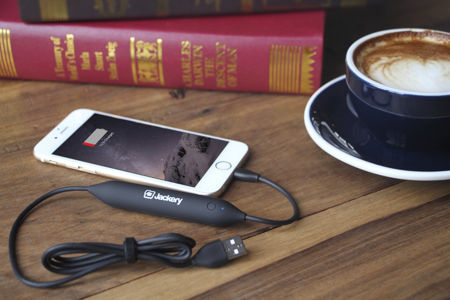 Apple has certainly forged the way forward where new technologies are concerned with the mobile device space. The Lightning port is definitely a new format that did raise its fair share of hue and cry when it was first introduced, although many have come to love and accept it shortly afterwards, despite the fact of purchasing a new set of accessories to go along with it. This time around, we have the folks over at Jackery who have introduced a new 2-in-1 Lightning Power Cable that sports an integrated battery which will cater for various compatible Apple devices.

With but a solitary Lightning cable, users are able to gain the ability to boost their iPhones’ and iPads’ battery power, charge them, and transfer files between devices, now how about that? Jackery intends to empower people who are on the go with premium mobile battery chargers, and this is their maiden attempt at an Apple MFi certified product which will merge the likes of a compact, built-in external portable charger and battery, all in a single lightning power cable.

The patent pending Jackery Jewel happens to be the only power cable required in order to extend iPhones’ and iPads’ battery power, while letting you charge from any USB power outlet, as well as to transfer files to computers or other devices. When plugged into a mobile device, the Jackery Jewel can deliver up to 20 percent additional battery power while on the go, not to mention letting it be used as the primary power and charging cord, which will open the door to users to gain flexibility and freedom doing away with the need to carry multiple accessories.

This $19.99 cable measures 39.4” and will feature a premium polymer lithium ion battery and a high-efficiency circuit board embedded in a nine-layer protective shell. It provides an iPhone 6S charged up to three extra hours of standby time, and as the battery and circuit board are encased in a rugged plastic shell that has been drop-tested, you can be sure it is pretty safe to bring around.